Recently I had to go to Paris on a business trip for one night only. You are wondering how I squeezed in any sight seeing? Well, luckily I could take a fairly early flight and so I had some time before the evening event.

Our hotel was very conveniently located at the corner of Montmartre cemetery and only a short walk from Sacre Coer. So I used the spare daylight hour for a walk up the hill.

I just love the little streets filled with wine bars, artist shops and restaurants. Every corner I turned revealed a new hidden gem and it is fun to get a little lost (which is really hard to do, because as long as you head up, you’re going the right way). Make sure you walk across the Place du tertre and look at all the small paintings by local artists and maybe drink a café au lait in one of the cute little cafés.

At the end of this little trek I reached Sacre Coer, a beautiful white building overlooking central Paris. The church really isn’t that old, it was built at the end of the 19th century, which in European terms is pretty recent. 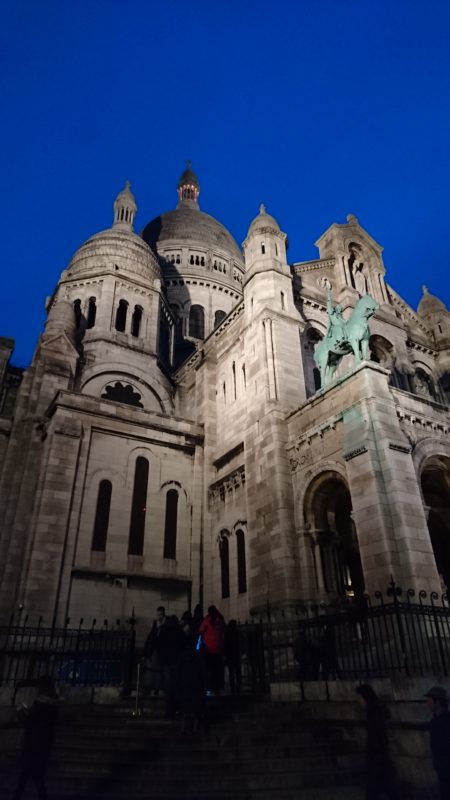 I love the white stones it is made of, even though the sky was grey, in my photos it looks blue behind the white of the church. It is worth spending some time taking in all the beautiful little details, the statues and the domed roofs.

The view from the square infront of it is fantastic, I could see the Eiffel tower illuminated to the right and Notre Dame to the left. During the days, especially in summer, the stairs in front of Sacre Coer are crowded with tourist. There are a lot of painters around, painting and drawing the people and trying to make a little money. I personally find it rather annoying, but it seems a lot of people really enjoy it and take a painting home.

On my way back to the hotel I took a little detour and walked by the Moulin Rouge, home of the famous movie with Ewan McGregor and Nicole Kidman. It has got its name Moulin Rouge from the little red mill on its roof. There used to be a lot of mills on the Montmartre back in the day, since it is the highest elevation in Paris and bound to be fairly windy.

Our business dinner was held on a boat with Bateau Parisiens dinner cruises, so while we were eating our 3 course dinner, we went up and down the Seine. As it was already dark, all the sights were illuminated and looked really pretty.

The Louvre, Notre Dame, the statue of liberty (yes, there is one in Paris too) and of course the Eiffel tower. The food was surprisingly good, for what looked to be a tourist trap, but I guess we were in France after all. The first course consisted of scallops in white wine sauce, the main dish was beef fillet with potato mash and veggies. And for dessert there was apple and pear gratin, like heaven on earth. There was live music too, playing in the background.

So if you are short on time, maybe just an overnight stay in the city, with this cruise you can combine your sight-seeing with an genuine french dinner accompanied by nice wines.

Have you been to Paris? What did you like best about it? 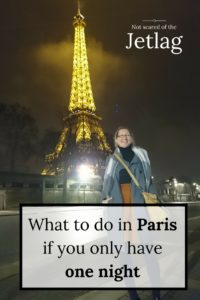