Are you going to southern Sweden and are unsure about what to do in Malmö, Lund and Ystad? I recently spent a weekend discovering those 3 cute towns and I will tell you what I did.

For about a year we had been talking about this project in the south of Sweden at work. And for some reason or other, it kept getting postponed again and again. But eventually, I got to go, two weeks in Malmö.

I had been to Sweden once before, last year, for a friends wedding. But this area here, never before. So I was excited to go and of course made sure to stay the weekend in between work to have a chance to discover the surroundings. First I thought I’d go to Copenhagen for a day, as it is only a 30 min train ride away. But then I changed my mind and decided to stay in Sweden and give Malmö, Lund and Ystad a proper look.

Malmö is an interesting city. It is Sweden’s third biggest city after Stockholm and Gothenburg. I found it hard to believe that in the early 1800s it only had around 6.000 inhabitants. It has a small old centre with squares to sit on and have a coffee, but just across the canal, there are fancy new buildings with lots of glass. Its most famous building is the Turning Torso, named after the Twisting Torso, a piece of art by Calatrava. The managing director of a big Swedish housing association liked it so much, he asked a famous architect to plan a building after it.

The Turning Torso is located in the new harbour area, which is self-sustainable, getting energy from sun and tidal power. To me the building looks very out of place, there are no other high-rise buildings anywhere close by. So it just stands there, in the middle of nothing really. Weird.

Close to this is a little Wake Boarding installation with a couple of ramps, for the adventurous among us. From here it is only a short walk to the beach.

My favourite place in Malmö was the Kings Park, next to the Malmö castle. The castle itself is not very impressive or even nice to look at, but the park, at least in spring, is really worth a visit. There is a picturesque windmill, flower beds overflowing with tulips, and a canal running through, with kayaks and ducks.

We had a nice work dinner at sunrise in the restaurant on top of the new congress centre, 25th floor, perfect views of the sunset over Copenhagen and the Øresundbridge just to the left. The food was awesome, prices reasonable for what you get. So if you are after something special, I totally recommend eating there.

Lund is a cute little university town with a relaxed vibe to it. I started from the train station towards the botanical garden. On my way, I walked through parts of the university with really nice old buildings. 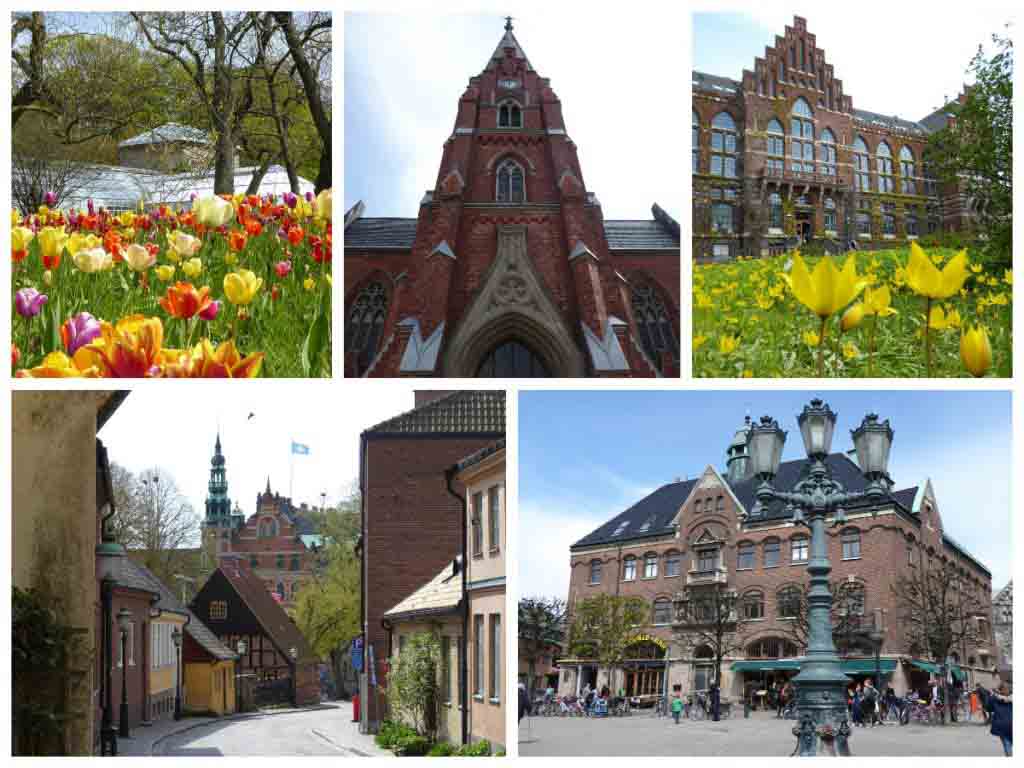 The Botanical Garden was started as a University Garden in the 1690’s to serve medical students as study garden. In the mid 19th century it was moved to its current location and still has some of the original structures from that time in place. The Orangeries at the side of tropical greenhouses are actually from 1865. Spring is the perfect time to go, everything is in bloom. The garden has different areas, herbal garden, rock garden and of course flowers wherever you look. I loved the smell of tulips and Magnolia trees, that followed me around.

From the botanical garden, I walked toward the centre through the former eastern gate. There is nothing left of the old city wall it seems, but they had signs indicating the gate had been there. Most of the city centre still has cobblestone streets and either red brick or half timbered houses.

In terms of sights, I only went to visit the Cathedral, a beautiful building dating back to the early 12th century. It had burned down and been rebuilt in the 1230’s and has been added to and renovated a few times over the centuries. The most impressive part of it for me was the astronomical clock it hosts. You can see the time of day and also the lunar cycle.

Many people know Ystad through the crime thrillers by Henning Mankell. His main character Inspector Wallander roams the street of this little city and many of the mentioned places really exist. So I had a lot of fun exploring this cute place even though it has been many years since I read the books.

The city centre is pretty small so you can explore it all in a matter of hours. It is totally worth leaving the main shopping street behind you and wander around all the little roads with the cute colourful half timbered houses.

The St. Maria church is worth a short visit, it is beautifully decorated with lots of love for details. You can find oak sculptures from the 16th century as well as a gothic chandelier from the 14th century, just to name a few. When I visited there was a small band practising for a wedding which made it even more special. 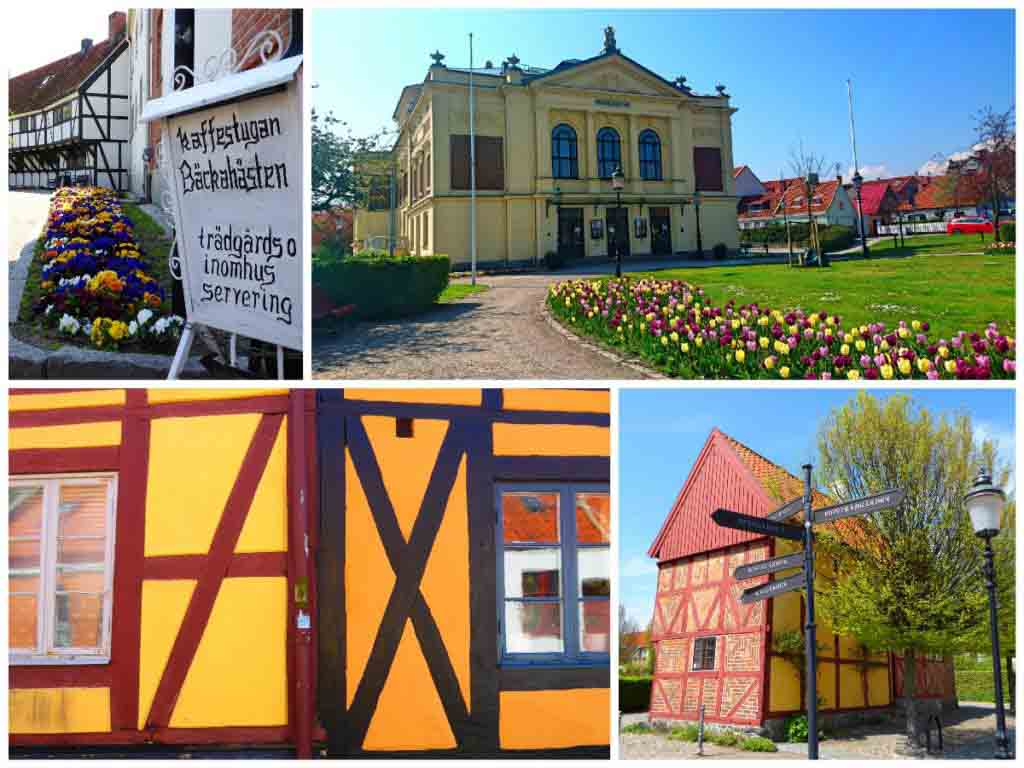 If you are looking for a place to sit and relax with a bit of green around you, there are two great places. The first is the rose garden of the Ystad Abbey and the second the Norra Promenaden. The former is a very pretty garden full of roses surrounded by other flowers and apple trees. The abbey dates back to the 13th century and was founded by Franciscan monks. Today it hosts a museum about the place’s history as well as contemporary exhibitions.

The Norra Promenaden is a very well laid out park on the edge of the city centre. When I went there the magnolia trees were in full bloom and it was so refreshing to take a walk along the little stream. I found a café which sadly was not open but looked like the perfect place for a drink or a snack.

Instead, I went to Bäckahästen Kaffestugan, a café with a big seating area outside under the trees. They serve traditional Swedish smörgas brod, yummy open sandwiches with smoked salmon or little shrimps.

I concluded my visit with a walk down the pier next to the yacht harbour. You have a beautiful view over the city with its theatre on the waterfront.

So if you plan on visiting southern Sweden, make sure to go to Malmö, Lund and Ystad.

This website uses cookies to improve your experience while you navigate through the website. Out of these, the cookies that are categorized as necessary are stored on your browser as they are essential for the working of basic functionalities of the website. We also use third-party cookies that help us analyze and understand how you use this website. These cookies will be stored in your browser only with your consent. You also have the option to opt-out of these cookies. But opting out of some of these cookies may affect your browsing experience.
Necessary Always Enabled

Any cookies that may not be particularly necessary for the website to function and is used specifically to collect user personal data via analytics, ads, other embedded contents are termed as non-necessary cookies. It is mandatory to procure user consent prior to running these cookies on your website.