I stumbled across Oman on a travel agencies website, offering trips hiking in the Empty Quarter in Oman, or Rub al Khali, the biggest sand desert in the world. And after my trip in the Sahara the year before turned out to be the best holiday I’ve ever had, I decided to give it a go.

I was a bit sceptical if this would be a good idea. You can imagine it would be hard to repeat a „best holiday ever“ experience. Also, this trip was guided by the German owner of the agency, not by locals, and there were 14 participants in the group, not four.

The start was nice

The trip started in Salalah, a city by the beach, which after the long flight was exactly what we all needed. So after a stop downtown to exchange some money and buy a few souvenirs, we chilled on the beach and went for a swim.

Early the next morning we took off towards the Rub al Khali with 4 Landcruisers and a pickup truck, packed with our luggage, food, water and fuel for a total of 10 days. We had a couple of stops on the way, to fuel up and have lunch. When we arrived at our first camp, to our surprise the pick up had a small goat in the loading area! I joked that it was nice they brought dinner, which they denied, but the name stuck.

Dinner was an untypical goat, at least that’s what our team told us. He wouldn’t hide from us when we tried to pet him. In the evenings he would “cry” until we brought him over to our carpet so he could be a part of the group. We took him to the bushes to feed. And he followed us everywhere if he was not tied up to a car.

Then it got serious

We spend the next days getting up early and walking through the dunes and the wadis in between for 6-8 hours every day. Well, to be honest, I only walked that long on 2 of the days. The other days I accompanied one of my fellow hikers back to the camp at midday. She couldn’t handle the heat and the team picked her up in one of the cars at lunch break every day.

The first day, I mostly went as a precaution because we didn’t know how bad she was actually doing. The days after that I mostly went because it was so much more fun to hang around the camp with her and our team than to drag myself through the sand in 40 degrees.

The afternoons spent with our local crew in the makeshift camp quickly turned into our favourite part of the trip. We shared leftover food for lunch, chilled in the shadow, watched them play cards, read our books and asked and answered a million questions. It really made the holiday special, having this connection to the locals, which wouldn’t have been possible, if we had been hiking all day along with the others. 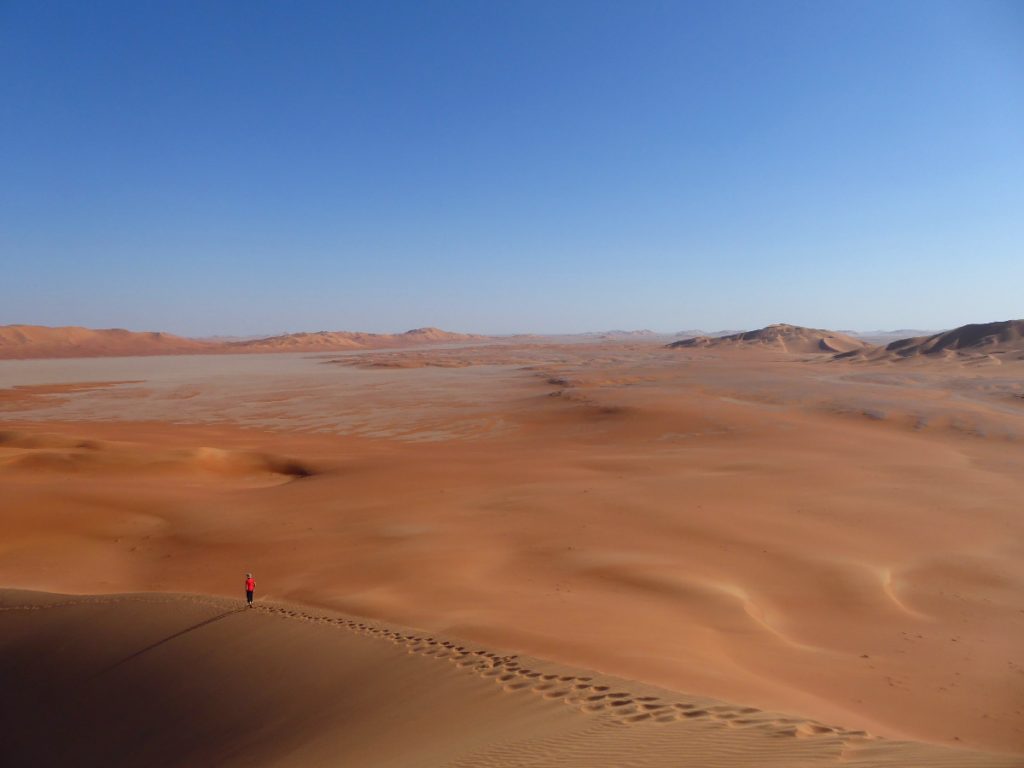 On the third day in the desert, it was one of the hikers’ birthday and, as a special treat, we had, I’m sure you can guess – yes, goat for dinner! The team killed the poor thing in the morning and then they slow cooked it with veggies and potatoes. Pretty tasty, I have to say. When the team shared the leftovers with us for lunch the next day, they offered us the brain, which I politely declined, but the other two hikers actually tried.

The hiking was really exhausting, 20 km through the dunes and across the seemingly never-ending wadis is a lot to walk. Even the fittest among us complained about the heat in the afternoon. But some people just refused to get up earlier or hurry a bit in the morning for the benefit of arriving at camp before the hottest time of day. And, even worse, the guide didn’t adjust to the weaker participants. We only had the choice to be picked up at lunch break or walk to the bitter end. And to make it worse, the others told us, he frequently „got lost“ or at least picked a wrong turn. So they had to walk back for a half hour, so no one was very happy. 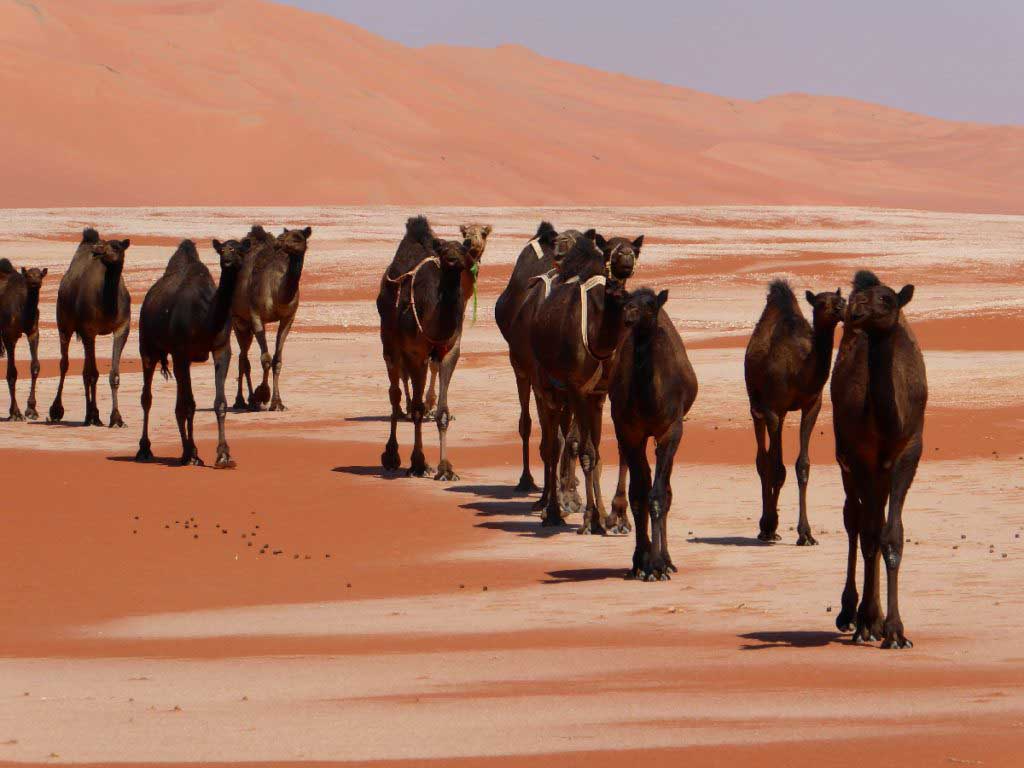 One day, when we were hiking through the flats all day, we came across dromedaries that belong to the bedouins in that area. They let them just walk around freely looking for anything green. And then they gather them to milk them every now and then. We all were really excited to see them, but when they came closer (I guess we were as much attraction to them as they to us) everyone got really scared. I just made them back up the same way I would with horses or cattle, make myself big and yell. So the ranch holidays paid off after all.

We were hoping to actually run into some bedouins and maybe be invited into their tents. But even when some showed up in a truck and did just that, our guide refused. He said we would be invited to drink camel milk and wouldn’t be able to say no. And then we would all get stomach sick for a few days. So the disappointed group walked on, only to find a gallon of camel milk in our camp. Our team had run into the same bedouins and they gave them the milk. We all drank some, and of course, no one got sick. Too bad we missed out on the chance to see a tent from the inside and meet some locals though. 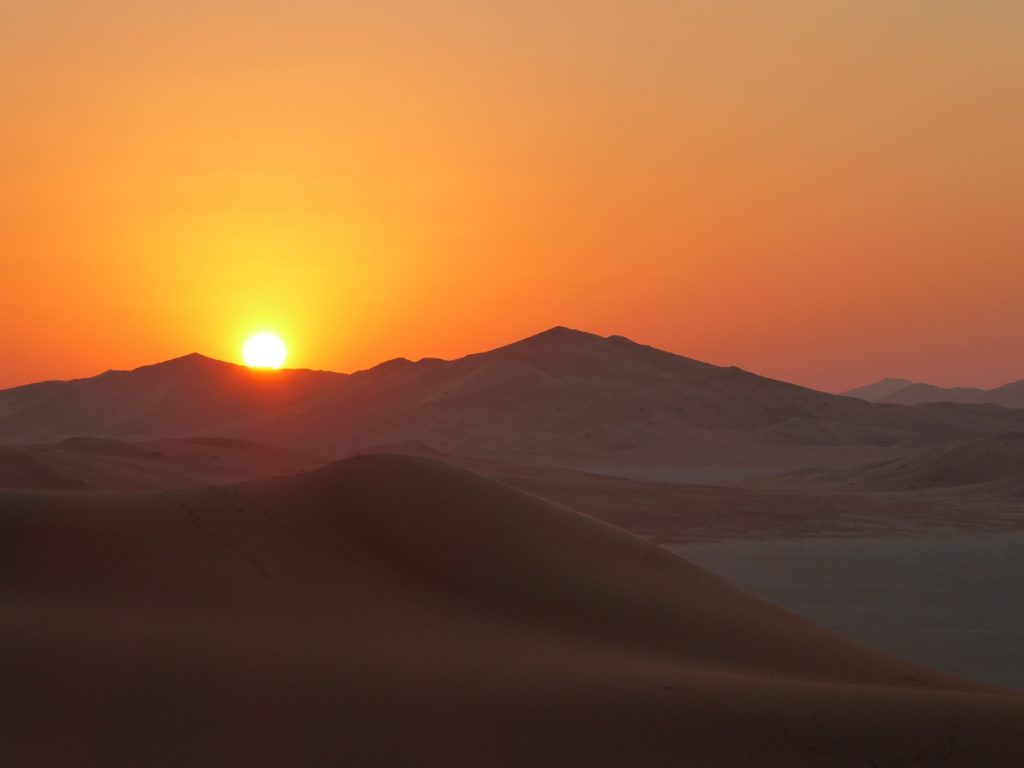 The most beautiful part

I guess everyone’s favourite time of day was sunset. We all climbed more or less high into the dunes to find the perfect spot for photos. The dunes are so pretty, up to 300 meters high. All different shades of orange, red and yellow, and sometimes even blue. But, in contrast to the diversity of the Moroccan desert, it looked the exact same for 10 days, even though we covered about 160 km in total. So I was a little disappointed. It also means, most of my photos from that trip look the same!

I guess most of us were a little relieved when it was time to leave the desert. It just hasn’t felt like a hiking trip but more like a survival training. It was a bittersweet goodbye for me at least. I love the desert, even though it is hot and exhausting. But the beauty of the dunes and sitting at a bonfire watching the stars at night make it all worth it. 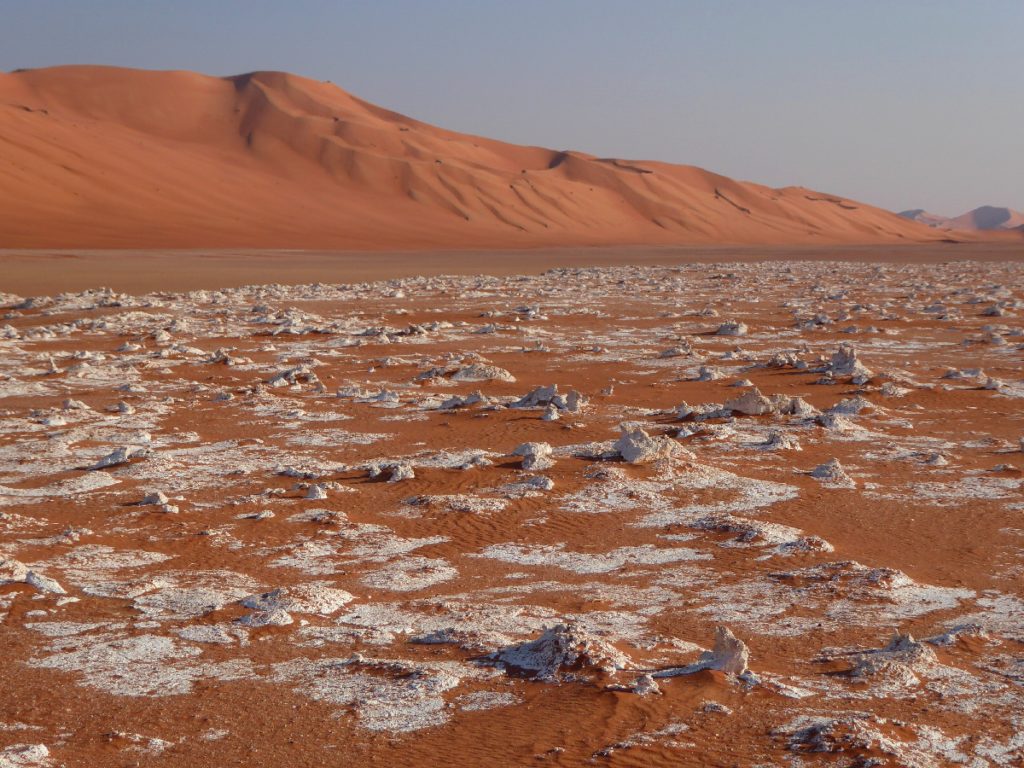 On the way back to Salalah we stopped in Ubar. It is supposedly the Atlantis of the desert, a former caravan city back from when camels transported the Omani incense to Egypt and the likes. They only rediscovered it in 1992. But, there is not much to see. Just a big hole in the ground where the ceiling of a huge cave collapsed, possibly causing the demise of this legendary place. 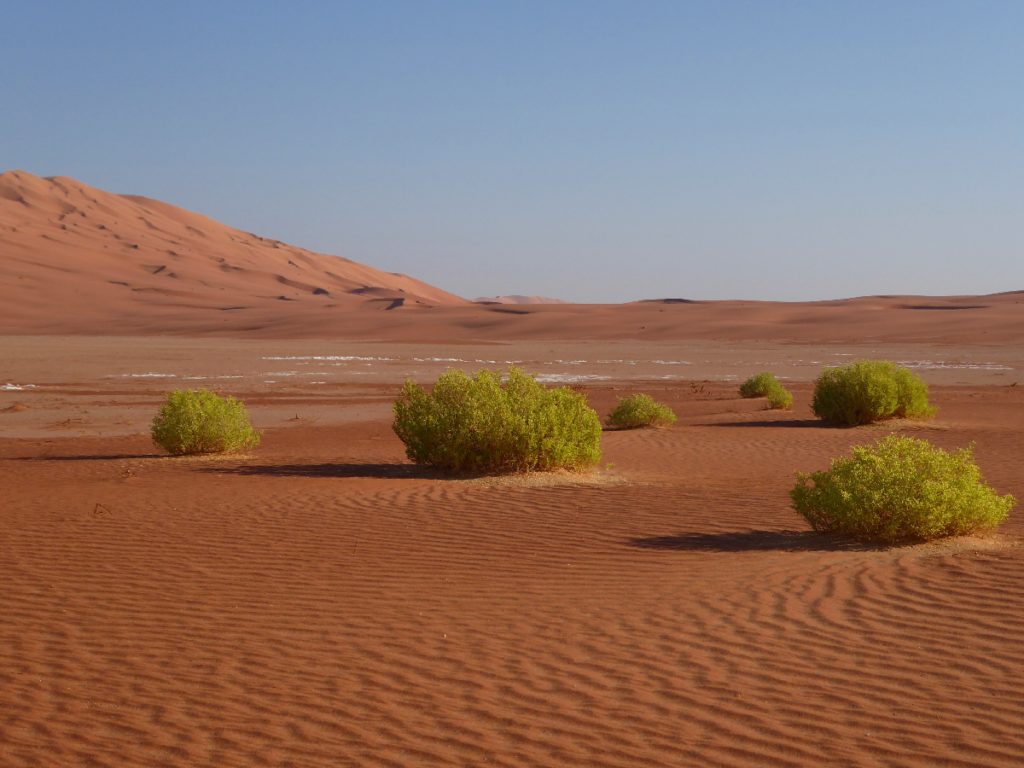 Back in Salalah, we couldn’t wait to hit the ocean and take a shower. Although I have to say, I had imagined 10 days without water being much worse. The good thing was, permanently covering your hair was seen as cultural politeness. And not as hiding my hideous hair.

The last day we spent in Muscat, shopping in the souk, walking around the beautiful town of Mattrah and having a posh dinner in a fancy restaurant. The others left in the morning, but I had booked 2 more nights in Muttrah in an AirBnB. Thad way I had a chance to experience the culture a bit more.

So all in all this trip did not manage to surpass my Moroccan experience, but it was a great trip in a beautiful country, and, under different circumstances (less km per day, less people in the group, local guide), I would even do it again. And I did fall in love with this beautiful country!

Have you ever been in a desert? Did you enjoy it? 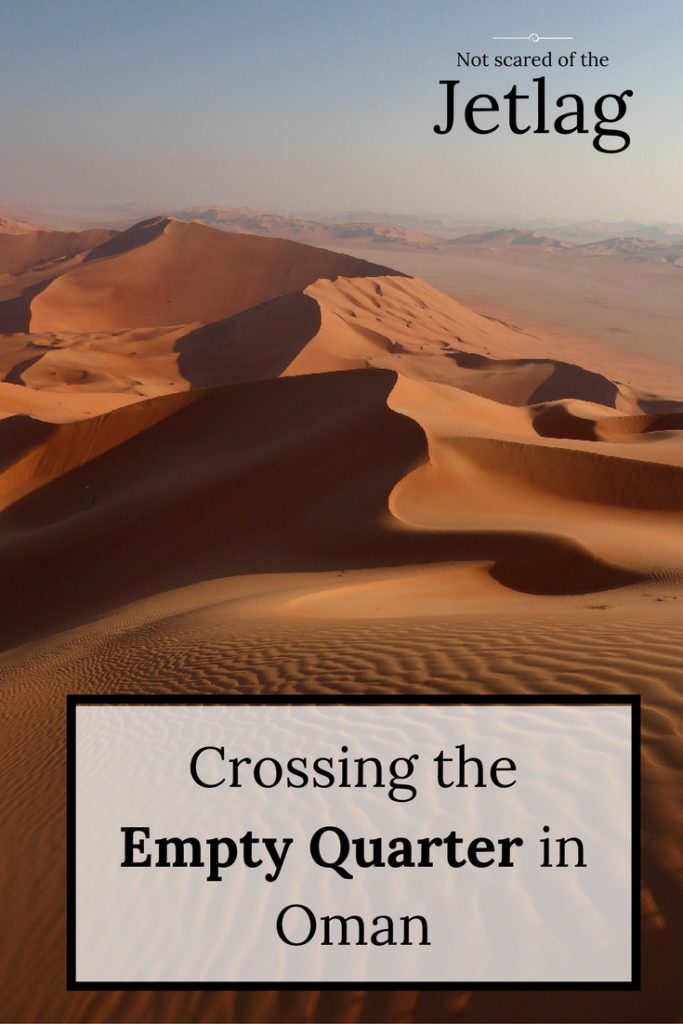