Nuremberg is so beautiful in the sunshine! To get an overview of the city, literally, I recommend you walk up to the castle, where you can see the whole city at your feet. It was almost completely destroyed during the war, but the city made an efford to rebuild it quickly. Just make sure to wear comfy shoes as the way up there is paved with old cobblestones. You will see the 2 major churches (Lorenzkirche and Sebaldkirche), the opera house, and if you know where to look, the Kongresshalle in the distance.

This place reminds of the Colosseum in Rome and was built under Hitler as a place for the NSDAP party meetings. It was never finished in the way he intended and now part of it houses the Dokuzentrum, a museum documenting the cities Nazi history. Also the Nuremberg symphony orchestra uses part of the building and hosts concerts in the courtyard.

In summer, make sure to check out the beautiful castle gardens, a great place to sit and relax, in the middle of colourful flower beds. If you follow the city wall a little ways south you can actually walk inside it and have a look at the Albecht-Dürer-Haus and the square infront of it.

Now if you make your way down from the castle make sure to stop at the (above mentioned) square just inside the Tiergärtnertor for a coffee, cold drink or a beer. Café Wanderer has nice coffee and cakes and the Bieramt serves a changing collection of local beers and wines. So no matter what time of day, if the weather is warm enough, the square in front of them will be full with people sitting on the ground, chatting and drinking.

In the middle of the square there is a big bronze statue of a hare, or is it a rabbit? It is a monument paying tribute to the most famous artist of the city, Albrecht Dürer. I personally hadn’t heard from him before I moved here, but apparently he was „the big thing“ back in the early 16th century. 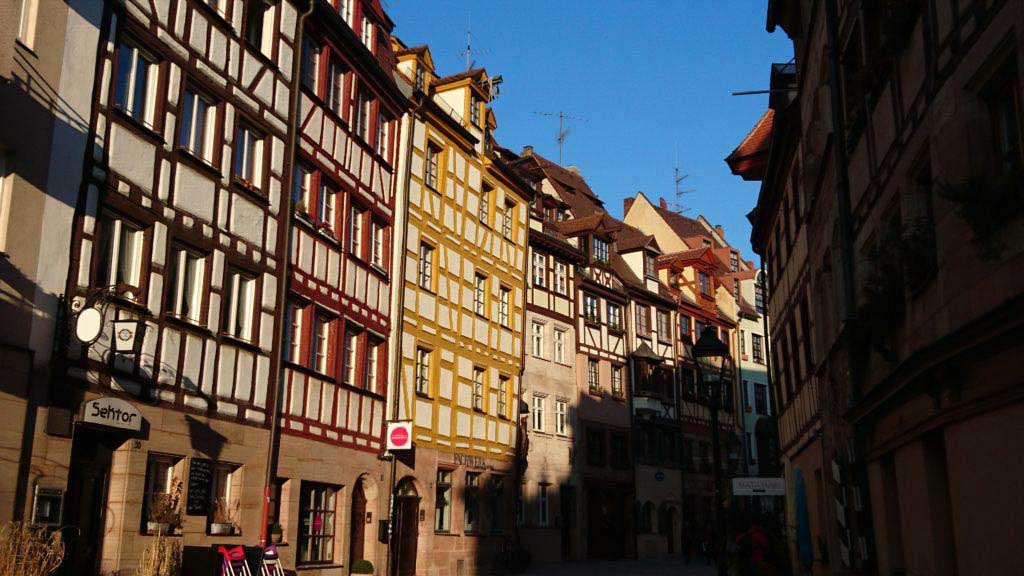 From there, make your way down the Weissgerbergasse, THE prettiest road in Nuremberg. When I first moved here, I was having trouble finding the „nice“ areas of town that everybody was talking about. So I had a look at the postcards and wrote down the names of the places mentioned in the back. And this road was one of them. It is full of half-timbered houses from the middle-ages that mostly survived the bombings during world war 2 unscathed. The best and most popular spot to take photos is from the lower end of the road facing back up.

Cross the river at the Kettensteg, the oldest chain bridge in Europe and then head towards the city centre. Walk across the roofed bridge Henkersteg and grab a coffee to go either at Espressowelt or Di Simo and sit down on the grass at the west facing corner of the island to enjoy a little peace and quiet.

If you are flexible with your travel dates, pick one of the festival weekends. My favourite is Bardenfest on the first weekend in August, when the city is literally full with musicians. You can find local bands at the bigger stages around town but also kids playing the flute or keyboard in front of their houses. I found some really cool bands there, check out Spring leaves & fire or Khuk Mongol to get an impression of the variety of styles.

Other festivals are Blaue Nacht in May, Brückenfest (a little way out of town towards Fürth) in August, or the Trempelmarkt, which is a huge fleamarket in the pedestrian areas of town happening on the second weekend in May and September.

What type of festivals do you enjoy?