After spending 5 days in the mountains of northern Italy I moved on a little further south. My plan was to explore Vicenza for a day and then either go to Verona or Venice for the last day.

My second AirBnB host was working during the day, so I had until the late afternoon to arrive in Vicenza. As the weather in Bolzano was cold and rainy on this Monday morning I decided to leave early. And instead of taking the highway I made it a road trip through the mountains.

I started off on the Wine Road with lovely views of the mountains and vineyards and turned into the mountains at Rovereto. I passed by a little town with a castle perched on a cliff and thought it would be a cool place to stop for lunch and a tour. But, no luck, it was closed to visitors that day.

So I had my pizza leftovers for lunch with a view of the valley below and drove on. The road went higher and higher into the mountains with very pretty views all around, but sadly no look-outs or car parks and too many turns in the road to risk just stopping on the side.

The AirBnB was located on a small mountain outside of Vicenza with a beautiful view. It had a nice garden, outdoor kitchen and there were 2 Swedish motor bikers there for 2 nights as well. The first evening we had some drinks together and for the second evening, they invited me and the host for a bbq dinner.

I spent the first day exploring the immediate surroundings, my host had given me a hiking map of the area and I went for a long walk. In the afternoon I just lazed around in the garden, reading and playing with the owner’s puppy dog.

A day to explore Vicenza

On Wednesday I went to Vicenza, all prepared with maps and suggestions from my host. Vicenza is actually home to a huge amount of impressive buildings by Andrea Palladio and is listed as a UNESCO world heritage site. Palladio’s style had a huge influence on western architecture, the US Capitol in Washington DC is an example of its wide reach.

After parking my car I made my way up the colonnades at Viale Dieci Giugno to the sanctuary of Monte Berico. The church looked really pretty and I wanted to go inside to check it out. What I didn’t expect was walking right into a crowded service with everyone staring at me for opening the door. Ugh, embarrassing! And, no photos.

Just in front of the church is a square with views of the entire city, so I went to have a look at what I would explore later. But for now, I kept walking uphill towards the Museo del Risorgimento e della Resistenza, the war museum. I didn’t go inside, but the park behind hides the start of a short cut to the other side of the hills, where I wanted to visit some villas my host had recommended.

What I did not expect was for it to be a gravel path going very steep down lots of steps. I was wearing sandals, which was clearly not a good choice for this type of adventure. But I made it down the mountain in one piece and walked towards the Villa Rotunda. I ended up not going inside because they actually charge 10€ just to see the grounds. But I did take some sneaky photos through the fence.

So many famous villas

So instead I kept on walking back towards Vicenza and visited the Villa Valmarana Ai Nani, which also cost 10€, but it definitely was worth it. There are a couple of buildings you can visit, the main one is a mansion from 1669 that has frescos by the famous Italian artists Giovanni Battista Tiepolo and his son Giovanni Domenico Tiepolo. The 5 rooms you can visit show five different topics from Greek mythology.

The other building used to be the guest house and now hosts a big library as well as rooms with frescoes of Greek gods, everyday life and scenes from carnivals. The garden is surrounded by a wall which is adorned with statues of dwarfs. This was supposedly to make the daughter of the family, who was of dwarfish built, feel better.

After this, I started to feel really hungry so I made my way back into the city. My host had recommended a restaurant in the centre to go and eat the famous local dish Baccala alla Vicentina. But I was out of luck, they only serve it on Tuesdays and Fridays and it was Wednesday. I still went to have lunch there, the restaurant is frequented mostly by locals and it is self-service. I felt like going to a cafeteria, but the food quality was really, really good.

Re-energised I now headed to the see the Palazzi of the city, the Basilica Palladiana, which is probably the most famous building by Palladio, as well as multiple other palazzi in the side streets. Another place I only looked at from the outside but didn’t spend 10€ getting into was the Teatro Olimpico. I do regret that though, now that I’ve seen pictures on Instagram of the inside I wish I had gone in.

So I guess I have a good reason to visit Vicenza again in the future. Before I went home I walked around the Giardino Salvi, a really nice green park with some water around it (not sure if canal or river) and more pretty buildings.

An afternoon in Verona

On my last day I was a little bit lazy in the morning and just hung out at my AirBnB. But in the afternoon I actually drove to Verona, which was only about an hour away. Compared to the other places that I’ve been to during this holiday I didn’t like Verona very much. There were just too many tourists around.

Especially around Juliet’s balcony and Romeo’s house, there were just way too many people. Is it just me who finds it weird that you can visit a place that was thought up by Shakespeare? I mean, at least if you go to Potterworld, you know it is not real. But the other tourists treated Juliet’s balcony as if she had really been standing on it centuries ago…

Also, the city seems a little too clean to be authentically Italian in my opinion. Nonetheless, it’s very pretty and I wish that the opera season has already started so I could have gone to see an opera at the famous Arena di Verona. But that only started later that month.

I guess my favourite part of Verona was just walking around the back streets, away from the crowds. And climbing to the top of the Torre de Lamberti, although to be fair I did take the elevator. The views are so amazing though, it’s totally worth spending the money.

So this pretty much sums up my 10 day holiday in Italy. if you missed the first part, click here to read what I was up to in the mountains. And here you can read about my paragliding adventure in Val Gardena.

Which is your favourite city in Italy and why? 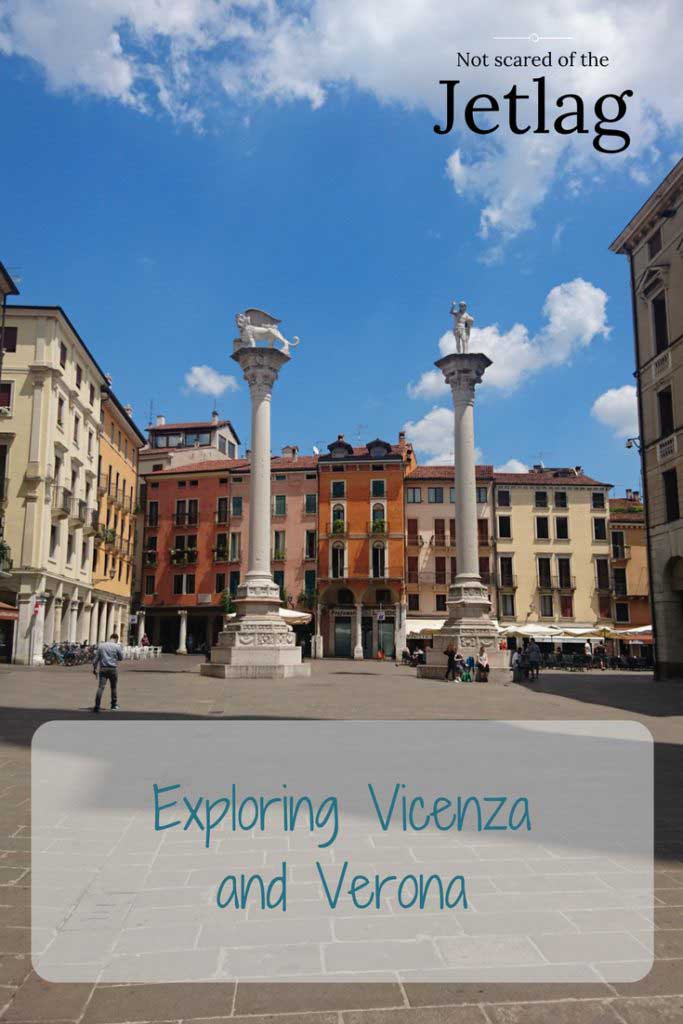