Fes (or Fez) is arguably the most beautiful city in Morocco and much more authentic than Marrakech (as in, less specifically catering for tourists). There are gorgeous buildings, narrow alleys and lots of crafts to be observed. So you should definitely plan to visit Fes during your trip to Morocco. To help you plan I put together this list of awesome things to do in Fes.

Also check out these Fes posts:

What I like best about Fes, the medina is car and (mostly) motorbike free. It is actually the biggest car free urban space in the world. So it feels much safer to walk around without having to constantly be alert and watch your back.

The medina of Fes has been part of the UNESCO world heritage list since 1981, if you are interested, check out my post on the other UNESCO sites of Morocco.

Apart from Fes al Bali, the medina, the oldest part of the city, there is Fes al Jedid, the “new” part of the medina from the 13th century and the Ville Nouvelle built under the French. The interesting areas from a tourist perspective are Fes al Bali and to a lesser extend Fes al Jedid. The Ville Nouvelle is purely residential with some modern shopping malls and such, so I didn’t include it in my list.

I will however show you the free things to do in Fes as well as the best sightseeing options. If you are fit and willing to walk a bit, you can see a lot in a day. But I would recommend staying two days at least, maybe 3 to include a day trip.

Fes is thought to be the oldest city of Morocco. It was founded in the 9th century AD and grew fast, not lastly because of all the Jews that were given refuge, bringing lots of trade business with them.

It was always a stronghold against the Berber tribes in the mountains and remains today a city almost exclusively populated by Arab Moroccans.

Due to its famous university, the extensive trade and lots of craftworks (especially leather, carpets and copper), Fes remained an important centre of science, arts and crafts, even when the political centre was moved away.

Fes saw its best times in the 13th and 14th century, when the richer people moved out of the medina and started populating the area known as Fes al Jedid. This is also where the big Mellah, the Jewish quarter is located.

Sadly, not all of the fabulously decorated old merchant’s houses in the medina are being saved from decay, but more and more are turned into Riads, restaurants or shops. So make sure to look behind the plain walls, whenever you get a chance.

Free things to see in Fes

If you are wondering what to do in Fes on a budget, check out this first part of the list. Of course, you also want to check them out if you have a bigger spending budget. Just because they are free, doesn’t mean they are not worth a visit.

You might want to start your journey at the Bab Boujeloud at the west end of the medina. The medina is surrounded by a big wall with a total of 13 gates (gate = Bab). Undoubtedly the most beautiful one is the Bab Boujeloud, the blue gate.

From the square outside the Bab you have a great photo opportunity, as you can see the minaret of the Madrasa Bou Inania through the opening.

Get lost in the medina of Fes

From here just follow one of the main roads through the medina down to the souks and the Karaouine complex.

There are so many places to visit in the medina of Fes, it really doesn’t matter which way you go first. And no matter how well you prepare, you will get lost! This is, in my opinion, one of the best things to do in Fes though.

And here, not even my beloved and trusted maps.me app always knows where you are. Especially in the souks, with their roofed alleys, your phone will not be able to connect to the GPS signal.

But don’t worry, as soon as you’re back on a bigger road, you will know where you are again. And it’s actually quite fun to just go with the flow and see what you discover.

There are actually signs in different colours up on the walls of the houses pointing the way to different sights. But they are quite easy to miss and you would have to spend a lot of time looking up searching for them. So I am not sure if that is worth the hassle.

If getting lost scares you too much, you can always hire a guide for a day. You can ask your Riad or message me. I’m happy to put you in touch with a great guide!

Admire the University of Al-Karaouine (or al-Qarawiyyin)

One of the many places non-Muslims are not allowed to entre in Fes is the Karaouine mosque and university. It is a huge complex and sadly you don’t get any good views from a distance as it is right in the centre of the medina with its narrow alleys.

But make sure to find the entrances (and there are a few) to the mosque where you can get some glimpses of the courtyard with its mosaics and washing fountains.

The Mausoleum of Moulay Idriss is also part of the Karaouine complex, and it is the most important pilgrimage site of Fes. Again, it’s also not possible to visit for non-Muslims. But it has one fantastically decorated door with views of the inside that make it worth the search inside the maze of the medina.

Try haggling in the souk of Fes

Fes is actually a great place to buy some souvenirs, as so much of them are produced in the city. Try to find someone who makes them, not just sells them and try your luck with haggling. Aim for 30-50 % of the first price you’re given for a good deal. If you want to learn more, check out my post about souvenirs from Morocco.

One of the top things to do in Fes is visiting and photographing the tanneries. Especially the biggest one, the Chouara Tannery, is probably the most photographed location in Fes these days. I’m sure everyone has seen the colourful photographs of a tannery in Fes on Instagram.

If you don’t plan to buy some leather in the shops with the viewing terraces, be prepared to pay around 10 DH to be allowed up there. You will most likely get a short introduction into how tanning works included in this though.

But first, you will have to find them. There is actually a marker for it in the maps.me app of Fes, so if you can get close enough, you can then follow the signs. If you ask someone for the way, be prepared for them to take you to another tannery, and ask for money, even if you are already almost there.

You can also follow your nose, as tanning stinks! I was there in November and didn’t find it so bad, but I’m a doctor and used to bad smells. They do hand out mint for you to hold under your nose, but if you are sensitive to smells, maybe bring some tiger balm.

In Fes, leather is still tanned the same way as hundreds of years ago, using pigeon droppings, quick lime and cow urine (hence the smell!) as well as natural colours. The men then walk around on the leather in those huge buckets, making it soft, while at the same time submitting their own skin to those strong chemicals. While they make a good salary, their life expectancy is rather short.

If after all those bad smells you are in need for some fresh air, I recommend heading to the Jardin Jnan Sbil. It is close to the Bab Boujeloud and rather easy to find.

You can enjoy colourful flowerbeds, the shadow of many trees and a lake with a fountain. A welcome, quiet oasis after the busyness of the medina.

Doors of the Palace

From here it is not too far to the King’s palace, Dar al Makhzan, in Fes al Jedid. And while you cannot visit the palace itself, you can admire its huge golden doors.

Close by, also in Fes al Jedid, you can visit the mellah of Fes. You can easily spot the difference to the buildings of the medina, the buildings here have windows and balconies facing the streets.

Jews populated the mellah until 1967, when most of them emigrated to the newly found state of Israel.

You can visit the synagogue and if you’re lucky also the Jewish cemetery, but you will probably have to pay a small tip to the guard.

Of course there are some attractions in Fes you have to pay to see, but I promise you they are totally worth it.

The Madrasa Bou Inania is, in my opinion, an absolute must-see in Fes. It is one of the very few Islamic buildings in Morocco that are open to non-Muslim visitors and one of the biggest and most important Quran schools in Morocco.

It dates back to the 14th century and is built in the classic design: a central courtyard with a water fountain surrounded by prayer and study rooms on the ground floor. And very small rooms on the upper floor for the students to sleep and study.

The walls surrounding the courtyard are spectacularly decorated with tiles, stucco and cedar wood carvings and some calligraphy, depicting verses of the Quran.

Another one of my favourite places in Fes is the Foundouq al Najjarine. A foundouq used to be a “hotel” or caravanserai, where traders could stay for a few days in upstairs bedrooms while conducting their trade business on the ground floor. It dates back to the early 18th century.

The Foundouk al Najjarine is in the middle of the area of woodworkers, so it should come as no surprise that it now houses the museum of wood and woodwork.

Even if you are not interested in the beautiful collection on display, you will want to check it out for the architecture and the view over Fes from the rooftop.

While you are here, check out the fountain on the little square in front of the museum. Apparently it is the most beautiful fountain of the whole city.

The Dar Batha museum is fairly close to the Bab Boujeloud in direction of Fes al Jedid. It is a former royal palace and one of the most impressive buildings in the city. In the centre there is a big courtyard housing a beautiful garden surrounded by the many rooms holding the collection.

You can find everyday articles like pottery and jewellery, different styles of mosaics and the typical Moroccan doors as well as weapons. 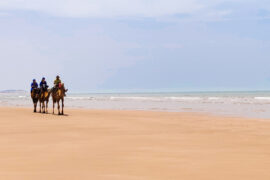 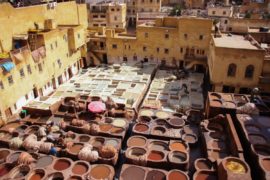 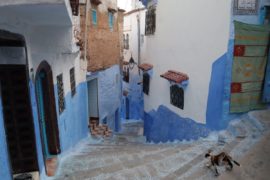